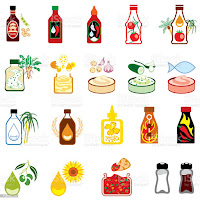 In North America, any dish made with a teriyaki sauce is described using the word teriyaki. This often even includes those using foreign alternatives to sake or mirin, such as wine, or with added ingredients, such as sesame or garlic (uncommon in traditional Japanese cuisine). The sauce used for teriyaki is generally sweet, although it can also be spicy. Pineapple juice is sometimes used, as it not only provides sweetness but also bromelain enzymes that help tenderize the meat. Grilling meat first and pouring the sauce on afterwards or using sweet sauce as a marinade are other non-traditional methods of cooking teriyaki. Teriyaki sauce is sometimes put on chicken wings or used as a dipping sauce. Variations