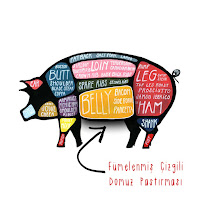 Back bacon is the most common form in the UK and Ireland, and is the usual meaning of the plain term “bacon”. A thin slice of bacon is known as a rasher; about 70% of bacon is sold as rashers. Heavily trimmed back cuts which consist of just the eye of meat, known as a medallion, are also available. All types may be unsmoked or smoked. The side cut normal in America is known as “streaky bacon”, and there is also a long cut, curving round on itself, known as “middle bacon”, which is back bacon at one end, and streaky at the other, as well as less common cuts.

has been added to your cart:
Checkout