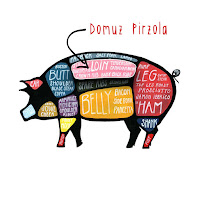 A pork chop, like other meat chops, is a loin cut taken perpendicular to the spine of the pig and is usually a rib or part of a vertebra. Pork chops are unprocessed and leaner than other cuts. Chops are commonly served as an individual portion. Pork is one of the most commonly consumed meats in the world. In the United States, pork chops are the most commonly consumed meat cut from the pork loin and account for 10% of total pork consumption. Pork chops are suitable for roasting, grilling, or frying, but there are also stuffed recipes. They can be used boneless or bone-in. Pork chops are usually cut between 1 and 5 centimeters  (1⁄2 and 2 inches) thick. Improved breeding techniques have made it possible to cook pork to a lower temperature, helping it to remain juicy, while still being safe to eat. United States government guidelines recommend a minimum cooking temperature of 63 °C (145 °F).